Why does New York’s Meatpacking District draw masses of people to it?  Because of all the collisions of culture still happening there.  The butchers and packers in white smocks are still at work in their brick factories.  There are edgy, industrial-looking boutiques like All Saints. And, not far away, on 14th Street… Alexander McQueen, Carlos Miele, Diane von Furstenberg…and, until last month, Stella McCartney who has moved to Soho – where the rents are cheaper. 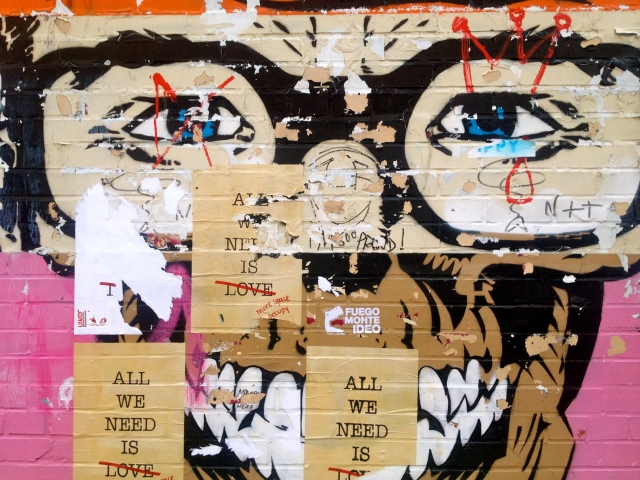 There is street art that The Pace and Mary Boone Gallery on 5th Avenue should collect.    Don’t sterilize this away to please the clubbers, or the growing ‘South Beach’ crowd that swarm the Meatpacking District on Friday and Saturday nights.

Of course, there’s the powerful pull of the High Line, once an old elevated freight line, now transformed through design to become one of the most magnetic new public spaces on the planet. That’s where I spent the last couple days, joining the spectacle of people.  Where art collides with history, and spring appears to arrive in techni-colour.

Shelter from the wind.  Countless sound and visual experiences happen as you walk along the High Line, like this one:  artist Spencer Finch’s “The River That Flows Both Ways”, panes of glass based on a single pixel point taken from a day’s shooting of the Hudson River.

Morning dawns golden at The Standard Hotel.  Interiors by Roman and Williams of NYC.

And, no, despite what the weather man was warning, it didn’t rain.