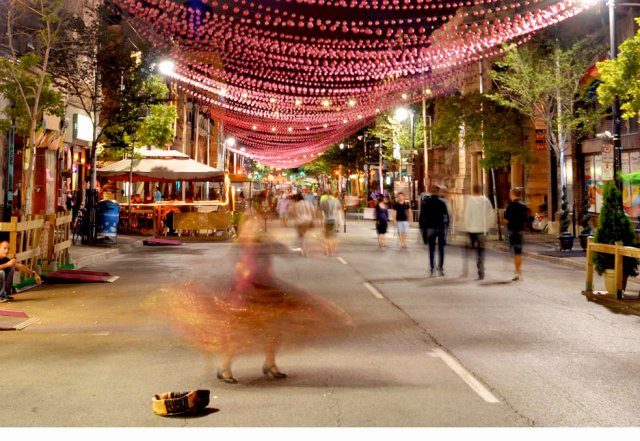 Pop-up architecture reinvents instantly. Sometimes it exhilarates.   Like this one: a canopy of pink balls floating over Rue Sainte Catherine in Montreal’s gay village, bringing waves of people to the newly created pedestrian mall below.  Check the Montreal artsy video for more.

At the Serpentine Gallery in Hyde Park, London, the 2012 temporary pavilion by Chinese conceptualist and dissident artist Ai Weiwei with Swiss architects Herzog + de Meuron sends a disc of water over an excavation cloaked in cork.  The columns from the 11 previous pavilions are revealed below. Chinese authorities prevented the fearless Weiwei from attending the opening earlier this summer.   Last year, Weiwei, who designed the Bird’s Nest, was imprisoned in China for several months and his studio was destroyed.

White tent drama popped-up at Fort York sprawling grounds in downtown Toronto.  Ghostly, ethereal, every one of the 200 tents offering artful interiors. Wander in late at night and cast your shadow against the shimmering shelters.